By Yasmine Cardenas   The morning ritual of pouring yourself a bowl of your favorite cereal can be such a sweet experience. If you’re lucky, you may even get a surprise in your box, like a toy.   But what Jensen Karp found in his Cinnamon Toast Crunch was no toy, instead, it was a frightening discovery.   On Monday morning, Karp was enjoying a bowl of Cinnamon Toast Crunch. While pouring himself a second helping, he noticed something strange plopped into his bowl. To his dismay, he knew it was a shrimp tail when he picked it up.

Jensen Karp, a 41-year-old comedian, and writer in Los Angeles. He is married to Danielle Fishel Karp, who plays Topanga Lawrence-Matthews on “Boy Meets World.”   Upon investigating the bag, he found what appeared to be another tail, both coated in cinnamon sugar.

Karp stated in an interview, “I get really grossed out, and I’m medicated for O.C.D., so this is a nightmare for me.”   Mr.Karp then sent a submission form email to General Mills explaining the contents he discovered in his cereal.   Next came a string of Tweets by Karp, in which the Cinnamon Toast Crunch Twitter account reached out to him. He stated that the brand was being nice in private and even offered to send a replacement box.

He respectfully declined.   The brand then tweeted a public statement.   “After further investigation with our team that closely examined the image, it appears to be an accumulation of the cinnamon sugar that sometimes can occur when ingredients aren’t thoroughly blended, read the Twitter statement, “We assure you that there’s no possibility of cross-contamination with shrimp.” Mr. Karp became frustrated at this response and responded in another tweet.

The contents that Mr. Karp found are includes in a large box of Cinnamon Toast Crunch which contains two bags of cereal. Friends suggested he check the bags some more.   As if the initial discovery wasn’t frightening enough, Karp discovered what appeared to be “shrimp skins-looking things,” “a small string” and what looked like pistachio- all coated in sugar. 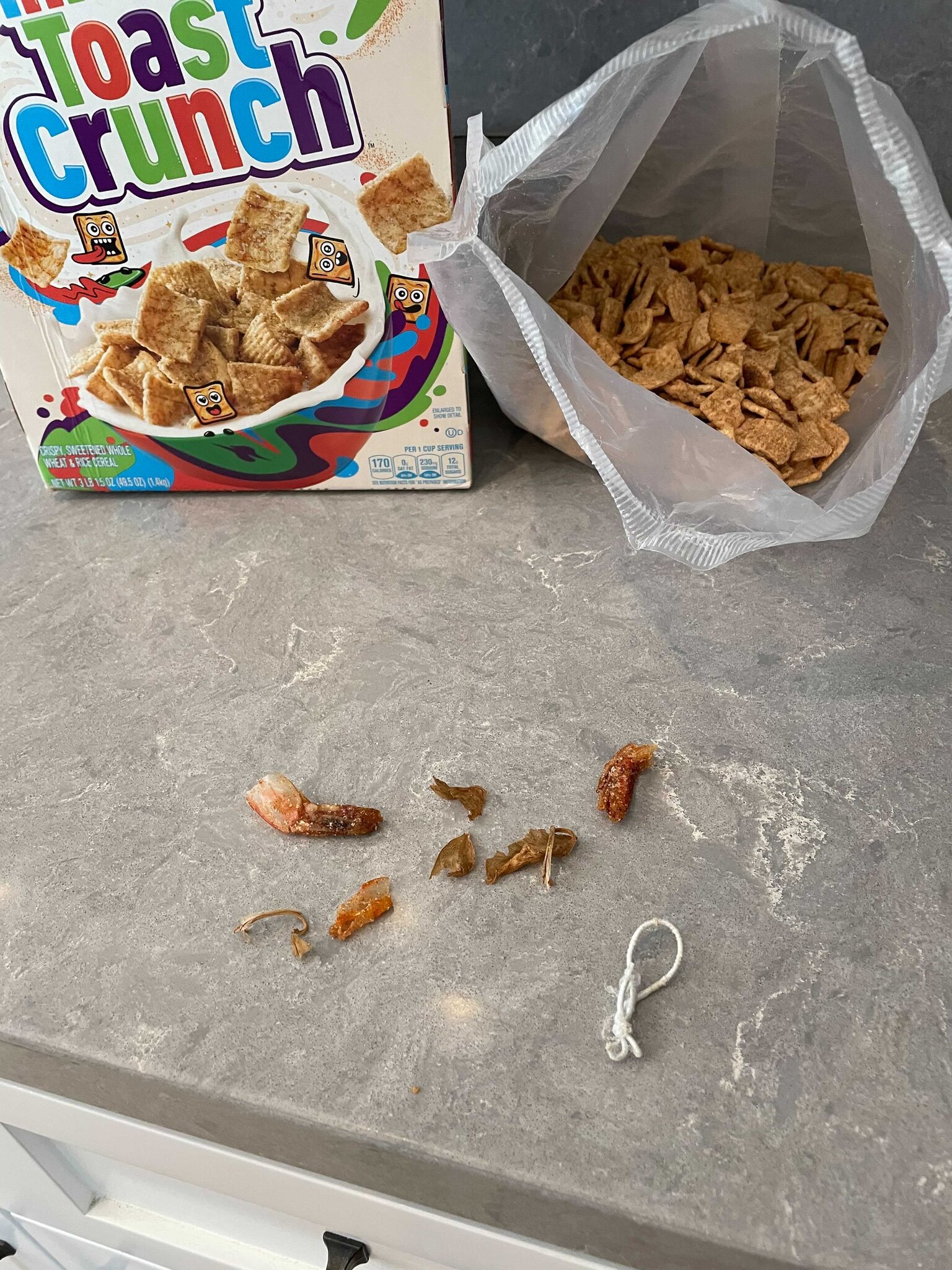 He also notice small black pieces that were stuck to some of the cinnamon squares and appeared at the bottom of the bag. He feared the worst- the possibility that it could be rat feces. The other bag in the box appears to be tape at the bottom, which led Karp to believe that the cereal might have been unsealing with.

After contacting multiple testing companies, Karp is waiting for confirmation that what he found was, in fact, a shrimp tail. So far he has no symptoms and believes that he is not sick but wants to check what he ate.   “I am not considering legal action. Obviously, if I ate rat poop, we’re gonna have to readdress that,” said Karp.

This is not General Mills’ first run-in with shrimp. In 2011, the brand sued a Michigan blueberry packer after a shipment of blueberries was contaminated with pieces of shrimp. The blueberries are intended for use in blueberry scones.

Karp was giving updates via Twitter. In true Twitter fashion users were cracking jokes, making memes, and even using the very strange ordeal as inspiration for shrimp recipes.

Mr. Karp expressed that his experience is real and not a joke.   “I’m a comedy writer, but like, there’s no joke here,” he said. “To take down my favorite cereal brand? I don’t even know why that’s a funny joke. I love Cinnamon Toast Crunch. It’s the only cereal I eat. I own the Kyrie Irving Cinnamon Toast Crunch Nikes.”   Cinnamon Toast Crunch tweeted another statement encouraging consumers to report the product if they believe it has been tear with.

Well, it seems like not all surprises are good. Some are just downright frightening. It’s been a sad few days for Cinnamon Toast Crunch fans.   And if you’re wondering how we’re feeling about it, here’s a tweet that sums it all up.