What food annoys you most?

Is it licorice? If so, you might live in Florida.

Do you hate overcooked steak? You should consider moving to Texas, while fast food haters might want to head to Oregon.

Statistically speaking, at least. But only if you're single.

A dating app founded in 2016 called Hater -- through which, unsurprisingly, singles bond over mutual dislikes -- compiled data from the 600,000 users who have swiped more than 100 million times on some 3,000 topics since February, the site's spokesperson told HuffPost.

From there, folks looked at all the popular food-related items of hatred and broke it down by state to find out what each demographic despises.

From capers to expensive cheese plates to tofu to the corner piece of a brownie, this diagram has it all.

Here are each state's most hated foods: 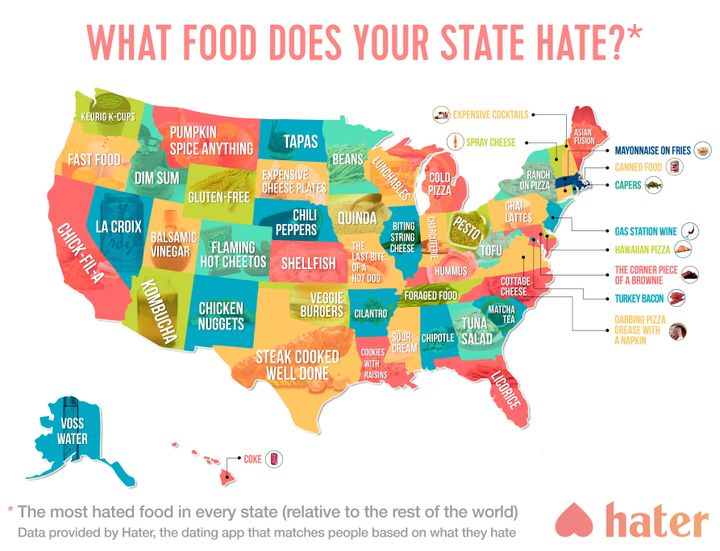 Midwesterners and southerners most loathe foraged food, the last bite of a hot dog and lunchables, among some other quirky picks:

Those on the other side of the nation, meanwhile, are fed up with pumpkin spice, gluten-free food, Hot Cheetos and the ever-popular Chick-fil-A.

Oh, and Alaska and Hawaii each have some sort of beverage vendetta for unknown reasons:

Are you a hater? You might consider downloading the dating app, if only just for your own entertainment.

App creator Brendan Alper told The Washington Post that he turned his wacky idea for Hater into reality not just "to be edgy" but also to give people some "good fun."

"What if you were swiping not just on people but on everything?" Alper said of his original concept, which started out as more of a comedy pitch than an actual dating site to go against the grain of the bigger, more conventional fish out there.